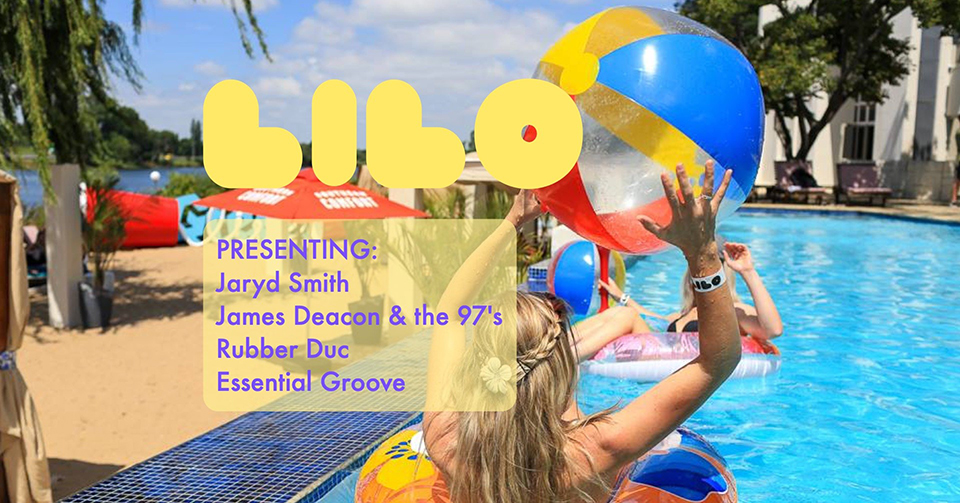 TIME: 12pm – 8pm
INFO: LILO is back in 2020!
We know that you need a Saturday out in the sunshine to recuperate from a mad 2020, so we are throwing a party just for you on the beautiful green grass at the East Rand speed Boat Club at Ebotse dam!

Tickets are limited to 500 guests as per Level 1 regulations so get your ticket today to avoid disappointment.

Gourmet food available on the day!

Brannas Draught on tap all day and many many more!

No under 18’s.
TICKETS: Online Tickets:
www.howler.co.za/LILOBENONI Tickets are limited to 500 guests as per Level 1 regulations
MORE INFO: More Info on Facebook

Some of our events we’ve had a lot of fun putting together in the past. Expect more in the future!

The Green Craft Beer Festival, held at Benoni Northerns Sports Club on the 4th June 2016 was the first of The Green.Live’s events, and it was a great success.

Many folks were ecstatic at the level of professionalism of the whole day – from our awesome Craft Beer stalls, to the amazing Band Lineup as well as our World Record Beer Pong attempt.

Bands on the day included: Bye Beneco, Crystal Park, The Motherland, Jaryd Smith and Adelle Nqeto. The day was MC’d by Steve East and the The Shittest DJ in the World kept us entertained in between bands with some awesome tunes.

Expect this to be an annual event, stay tuned here for more details on the 2017 edition.

This event saw a top lineup of Food Trucks and stalls, top Local & International Craft Beers & Drinks and a Lineup of Local Talent Second to none.

A crowd of all ages were entertained by bands Desmond & The Tutus, Hellcats, Sutherland, Josh Kempen and Adelle Nqeto whilst chilling on the lawns and tucking into amazing food, drinks and of course beer. MC Jamie Acheson had the stage running smoothly, while DJ Random Citizen played just about the coolest music in between the bands.

Stay tuned for details on the next Street Food Fiesta event to take place in 2017.

On the 4th of February 2017 the Green. LIVE hosted a beach party to end summer with a bang!

Bikinis, Beach sand, and a massive stage on the water ensured a Beach vibe like no other Benoni has ever seen.

Cielo Beach Bar was the perfect setting, and we had a lineup to boot: December Streets, Shortstraw, PHFAT, Bad Peter, Josie Field & Laurie Levine, Stephane Marais, Strait-Jackal and Jaryd Smith all entertained the crowd from noon til well after sundown.

The second annual Green Craft Beer Festival was held on the 3rd of June 2017, once again at Benoni Northerns Sports Club.

The weather played absolutely perfectly, and the scores of Beer lovers enjoyed a perfectly sunny winter’s day. Kids played in the awesome Clamber Club area while their folks enjoyed top Craft Beer and Food stalls – and tried their hand at helping us attempt a World Record Beer Pong tournament!

Bands on the day included: Rubber Duc, Bad Peter, Tidal Waves, Naming James and was ended with a brilliant DJ Set by none other than Random Citizen. MC Steve East was again on hand to keep the stage running smoothly, with the best sound & lighting from the Blue Array team as always.

The Green LIVE Brandy Fest, held on 2 September 2017, was the first of its kind on the East Rand and possibly, the World.

This epic event was a day of Brandy, Bands and Babes! With 10 bad-ass brandy distilleries, 6 blow-your-mind bands and much, much more, this was one heck of a party.

LIVE BANDS on the day included none other than JACK PAROW, THE BLACK CAT BONES, HELLCATS, RAMBLING BONES, CORTINA WHIPLASH and CRYSTAL PARK.

MC Steve East was again on hand to keep the stage running smoothly, with the best sound & lighting from the Blue Array team as always.